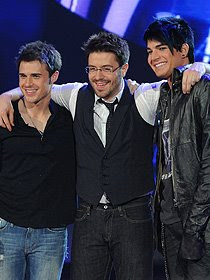 With the judges so focused on memorizing their lines, not one of 'em bothered to look up and see how Kris Allen, with his subtly shaded vocals and his sneaky-awesome song-arranging skills, had recast himself in the role of Adam's ultimate rival. And we the people followed suit, tossing the screenplay that said we had to give up our annual chance to play record exec, to give major-label deals to someone other than Jamie Foxx or Katy Perry or other pop stars of the Auto-Tune era. In the process, we put the reality back in America's most popular reality series. And as a reward, we are now preparing for the Best Possible Season Finale Not Involving Allison Iraheta That American Idol's Eighth Season Ever Could've Hoped For.

In other words, Idol's judges and producers may not have gotten what they wanted, but the show got exactly what it needed.